Paid for and authorized by Lippa for Sheriff

For A Safer Place To Live, Work, And Raise A Family

When Sheriff Lippa took office twelve years ago, the entire agency had only a couple of computers.  Office personnel were still using rotary dial telephones and working in unfit conditions.  It has been Sheriff Lippa's goal to bring the CCSO into the era of modern policing.  With help from the public, the voters, the Caroline County Board of Supervisors, and other county leaders, Sheriff Lippa has transformed what was once considered by many to be a "good ol boy" system into a modern and professional law enforcement agency recognized for its excellence by both regional and state leaders.  Below is just a small sample of the many positive things accomplished in the first twelve years.  With your help in November, we will continue to build the modern and professional law enforcement agency Caroline County deserves. 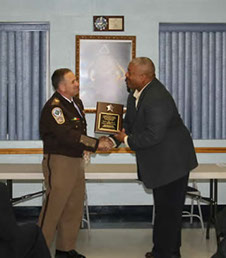 Under Lippa's leadership the following was accomplished:

Under Sheriff Lippa's leadership, every effort has been made to find alternate funding in the quest to provide the best, most advanced law enforcement services to County residents.  The following are but a few examples:

Law enforcement isn’t merely a career. It is a principle, a mandate of humanity that all life should be protected against violence and crime. It is about connecting community, businesses, local government and sworn law enforcement in a way that focuses efforts on solving community problems together in an uniform response, sharpening our resolve against those who wish to do harm and making a safer place for all of us to live, work, and raise a family.  Under Sheriff Lippa the CCSO has committed itself to the communities it serves in the following ways:

There is perhaps no greater contrast between the current and previous administrations than in the area of professional standards. The following are but a few of the ways in which the Sheriff's Office has been transformed into a professional, modern law enforcement agency:

Over the last twelve years the Caroline County Sheriff's Office has been transformed into a modern law enforcement agency.  Many of the items listed below were partially or completely paid for with grant funds or asset forfeiture funds (drug related assets seized by the CCSO)